The tactical balance and shape of the Italian team has been an interesting one in recent times, and one which Conte appeared to have settled on based on the last couple of preparation games. The 3-5-2, that has served Juventus well, is built upon that same back-line of Buffon, Barzagli, Chiellini and Bonucci; this seems set in stone and will to some degree dictate the structure of the team. The spread and high-push of the back three allows for greater flexibility and range of the wing-backs, who are crucial to Conte’s plans. Candreva and Darmian look set to feature in these positions. Candreva has been the one to offer attacking threat down the right, and trying to produce deliveries into the box that can bring Pelle into play and any late arrivals. The left-hand side could well become an area of more caution and build-up as opposed to overlaps and sprinting. However, Conte has recently been talking up his willingness of pressing (to the point of speculation over a 3-3-4 formation), which would involve Darmian having to get forward. The only way this would be forgone is if the opposition pin them back and have extensive possession on or ahead of the half-way line.

Conte said over the weekend, “As I said before, I like to adopt a proactive style of play and for this, balance will be important, both in attacking and defending.” Albeit, this style of pressing puts huge strain on the wing-backs physically. Florenzi, who will probably be playing right-side centre-mid, should be able to come across and help out in the right-back position if (when) Candreva gets caught out of position. Chiellini will probably have a job to do doing the same thing on the left, although Darmian may stay back more. Chiellini, although not a designated ball-playing defender (which is Bonucci), likes to pick up the ball and try to play it through midfield along the floor at times – through any corridors that appear to the strikers.

The rest of the midfield will most likely consist of De Rossi and one other – I’d have Parolo or Motta down as slight favourites to start currently, but Sturaro and Giaccherini appear to be liked by Conte. De Rossi will have an interesting role. With the lack of much creativity in the middle of the pitch, due to the absence of Marchisio and Verratti, De Rossi will be looking to receive the ball from the defence, and start off forward moves as the pivot. The single pivot lends itself to a pressing side, and the wing-backs can offer a lateral pass because they won’t be pressing high when their team is in possession. Juve are a good (and obvious) example of this, but rely on Marchisio’s technical ability and general competence in this role. De Rossi is strong, and is a decent passer of the ball – maybe not with the same range – but possibly not as effective at instigating quick transitions or operating in tight spaces retaining possession. That being said, he should be effective in that area of the pitch – like he has been in friendlies, also scoring a header against Finland – being one of their best players. It does draw into question the other two central-midfielders used by Conte. Does he need two more hard-working ‘attritional’ players in there? Many people were calling for the inclusion of Jorginho (although he probably would have been in De Rossi’s role), or Bonaventura (admittedly traditionally a left winger). The lack of ambition going forward from midfield is questionable. Giaccherini is more an attacking player, making runs forward and getting goalscoring chances in qualifying, but he hasn’t been in great form for the national team and is seen as a bit of a weak link by some. 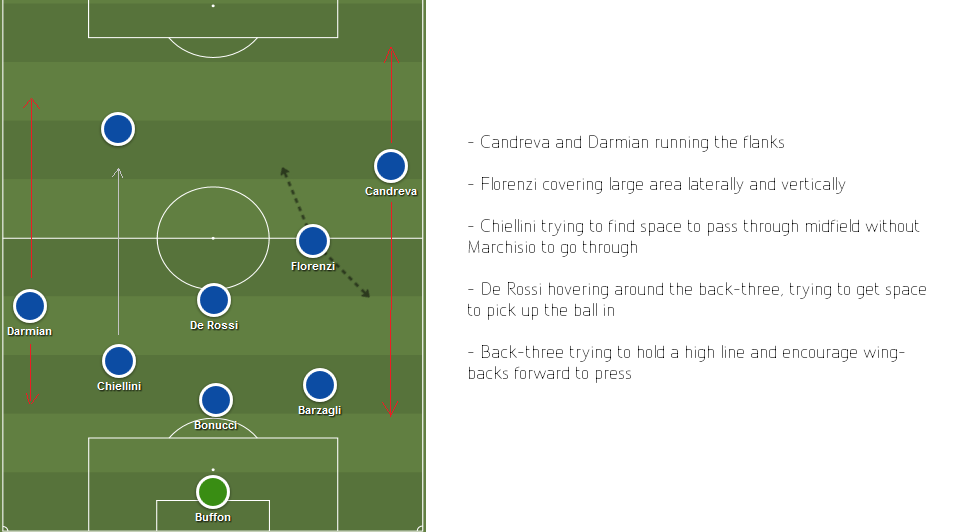 I want to briefly bring in an example of how the Juve back-line set-up can be put under pressure, in a scenario that Italy see themselves in now – one without Marchisio or Verratti. The example I’m bringing in is the last competitive game that they played – the Coppa Italia final between Juve and Milan. Brocchi’s Milan started off the game so well by pressing high and working extremely hard to close down Juve in the own half. This forced the play out wide a lot, without a natural pivot (they were playing Hernanes as the closest to this role) to pass to. If the wing-backs receive the ball in their own half, it slows down play and makes a long hopeful ball the most viable option at an early stage of their spell in possession. Hence, no Marchisio = no fluidity through midfield. Kucka and Poli won the midfield battle for Milan, and crucially their energy meant that Milan didn’t get exposed to a counter and they were able to pin Juve down in their own half. Juve’s high defensive line wasn’t really possible, and the game closed up in front of them, canceling out a lot of routes to the strikers. Conte will want to avoid this by firstly making sure his team control the midfield spaces and his team are the ones pressing the opponents into their own half. If this doesn’t happen, they may struggle to find a way to create chances. Belgium, being Italy’s first opponents, have a key man in all this – Nainggolan. He’s their energy and attrition against Italy’s advances, and he plays in Serie A – so should also have some experience of playing against this kind of system. Will the likes of Hazard / De Bruyne / Mertens help him out? Questionnable. Anyway, returning to our example, how did Juve win the game in the end? Milan tired after 70 minutes, and Allegri introduced two new wing-backs that were direct, attacking and quick on the ball. Will Conte do the same if in that position (Bernardeschi / Insigne / El Shaaraway)? 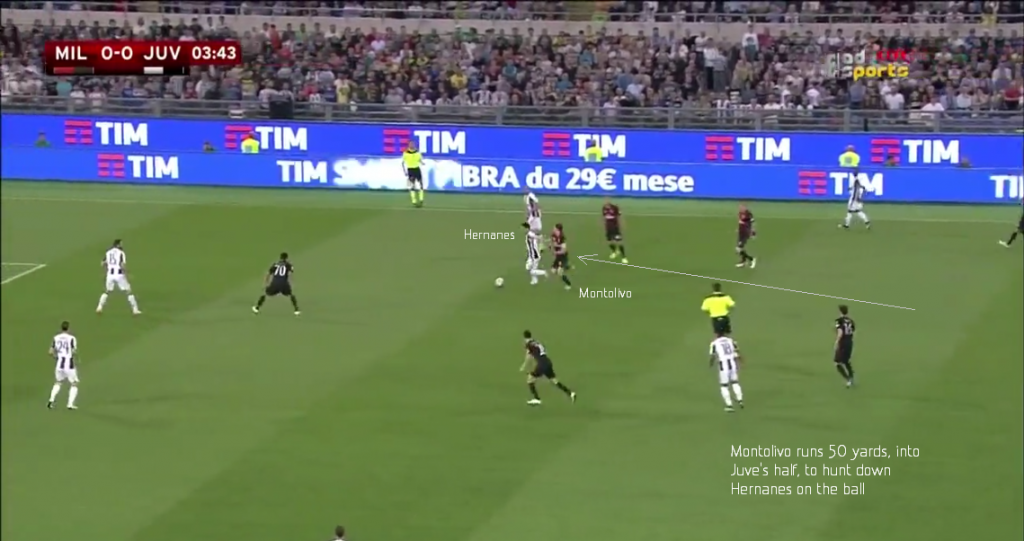 The willingness of Conte to use Motta will worry Italians slightly, after seeing his recent performances, he hasn’t really offered anything to the team in terms of attacking or defensive contribution. Technically, along with a lot of the rest of the side, he is lacking. De Rossi seems to be the only linchpin in the squad outside of the defence. Florenzi, although he can be forward thinking and demonstrate a good passing trait, he is often limited by the role he plays. He will look to get forward when he can and has proven he can score goals this season, but Conte may want to see his industrial side more than a creative one. Again, he may also be filling in on the right. One of the dangers of Italy’s set-up, is the congestion of the midfield. This can work as a positive and a negative. With the lack of Marchisio, they need a direct route to goal – this can either come from the flanks (mainly Candreva), or through the two strikers. A packed midfield blocks off passing lanes and makes it tough for the pivot (De Rossi) to pick out accurate passes. On the flip-side, when out of possession, Italy should be able to break up the play when needed and attempt to block out any counter-attacks. With an extra midfielder, they can operate a high-press in a fashion which would resemble the pattern of a double-pivot, where these two midfielders (for example De Rossi and Florenzi) can hold middle ground and make sure they stay behind the ball and secure the middle of the pitch without both getting dragged out of position. Florenzi’s energy would be perfect for this recovery out of possession. The flexibility of this also allows one of the two to push away and help with the attack near the edge of the box.

Italy’s strikers, of which there will almost certainly be two, are still in question. Zaza did all that he could to buy himself a starting role in the last friendly they played, where he applied his usual high work-rate to the game. Pelle appears to be the favourite of Conte, and should lead the line like he has done in previous matches. The other two options come in the form of Eder and Immobile. Neither have done much to impress in the two preparation friendlies, and Immobile doesn’t seem to have the same grit and energy at the moment that he used to. Eder struggles for goals, and can go for periods without having an impact on the game. Both look out of form. Insigne would be an obvious candidate, but Conte hasn’t given him any chances, and with the system being played the only real option to fit him in would be as the second striker. Its a shame, because the formation Conte plays doesn’t seem to lend itself to the distribution of talent they have around the pitch. There’s probably no space for El Shaaraway, who has looked like one of their best players when he’s played, or Insigne who was one of the best players in Serie A last season. Berardi, Bonaventura, Vazquez, Gabbiadini all don’t make the squad, Bernardeschi restricted to the bench; it feels like the system and/or the selections are a bottleneck for shining attacking talent.

In general, there are several key points to how Italy’s system should work out: