Despite playing well in parts in the group stages, Conte’s side went into the knockout stages off the back of a loss against Ireland – one in which although inconsequential to their position, gave away weaknesses to their competitors. The job was to then rally a performance like we saw against Belgium, and for this Conte reverted to a familiar selection. Florenzi deputised for the injured Candreva on the right, and the only surprise was De Sciglio’s inclusion on the opposite flank over Darmian. Before the game, we spoke about the key role in which the pivot and central midfielders could play, considering they have been an indicator of Italy’s effectiveness in transition and cohesion on the ball. De Rossi was brought back in to this role in front of the back three, as expected, and Parolo continued with Giaccherini in the middle.

It was evident that Italy weren’t going to shy away from playing a variety of passes from their own half. From the start, we saw De Rossi play a long searching ball out wide to Florenzi (which was inch perfect), as well as passes through midfield on the ground and the use of the wing-backs when necessary if the defenders were slow in build up or pressured. But the most effective route was often the long ball over the top to Pelle. It has to be said first of all that many of these balls were not aimless or hopeful. Like we’ve seen already on this tournament, Italy are prepared to get a lot of men forward to receive long passes from their own half – often sacrificing a big gap in midfield – and if they don’t win possession from it, they have men there to pressure high-up. Pelle was absolutely superb at winning these long balls, through knocking it on with his head to chesting it down and linking up with Eder. It was probably one of his most influential performances for the Azzurri because of this link-up he provided. Parolo is also actually quite tall as well, over 6ft, and is useful in winning headers. A large amount of Italy’s chances and good attacking moves came from this direct style and good interplay between the attackers. To put this into context, Spain actually made more long passes in the game than Italy. However, Conte’s side were set up so much better to use them and did so with a lot more purpose – making it an effective method of transition.

END_OF_DOCUMENT_TOKEN_TO_BE_REPLACED 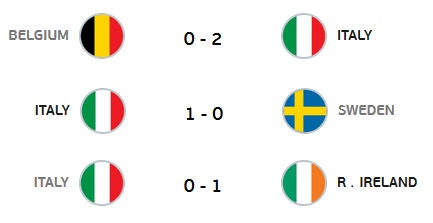 With a suspected tough start against Belgium, Conte drew on an expected and trusted system, fielding the 5-3-2 – which remained the case throughout the group stage. The only slight surprise was the inclusion of Parolo and omission of Florenzi in the Belgium game, who was then reintroduced and left back against Sweden at the expense of Darmian. Giaccherini managed to cement a place in the starting lineup and De Rossi, as expected got the nod ahead of Motta. Eder and Pelle proved themselves to be the preferred partnership up front. The third game, against Ireland, was somewhat experimental with the team having already topped the group – although interesting nonetheless. Despite a great start to the tournament, there was common themes (good and bad) for Conte to consider and work upon going into the knock-out stages.

The back three + Buffon was pretty much set in stone from before the first match, and this was billed as being the nation’s big strength. Nothing has really changed here. In the first game against Belgium, we were treated to some of Bonucci’s talents coming to the fore – the pinnacle of which probably being his long-ball assist for Giaccherini’s goal. We knew that he is the ball-playing defender, and that his range of passing is excellent, but we didn’t expect this to be demonstrated (and neglected by Belgium) so quickly in the tournament. Bonucci was given plenty of time to stand on the halfway-line and pick out Giaccherini, who made a good run in behind and Ciman switched off, for the first goal after half an hour. It was a bit symptomatic of Belgium’s start – they didn’t harass Conte’s side on the ball, they left too much time and space in midfield, and they looked flat-footed & passive without the ball. As we’ll mention later, Italy can struggle if routes to pass through the middle or out from the back are cut off, but they never really had this problem in the opening game, especially as their wing-backs weren’t really pressured either when receiving the ball directly. Chiellini was often able to chose who he wanted to pass to, sometimes ignoring de Rossi and attempting more aggressive balls through midfield or linking with Giaccherini on the left. Italy were able to keep a high line, and Belgium (Lukaku in particular) never really took advantage of running in behind.

END_OF_DOCUMENT_TOKEN_TO_BE_REPLACED

The tactical balance and shape of the Italian team has been an interesting one in recent times, and one which Conte appeared to have settled on based on the last couple of preparation games. The 3-5-2, that has served Juventus well, is built upon that same back-line of Buffon, Barzagli, Chiellini and Bonucci; this seems set in stone and will to some degree dictate the structure of the team. The spread and high-push of the back three allows for greater flexibility and range of the wing-backs, who are crucial to Conte’s plans. Candreva and Darmian look set to feature in these positions. Candreva has been the one to offer attacking threat down the right, and trying to produce deliveries into the box that can bring Pelle into play and any late arrivals. The left-hand side could well become an area of more caution and build-up as opposed to overlaps and sprinting. However, Conte has recently been talking up his willingness of pressing (to the point of speculation over a 3-3-4 formation), which would involve Darmian having to get forward. The only way this would be forgone is if the opposition pin them back and have extensive possession on or ahead of the half-way line.

Conte said over the weekend, “As I said before, I like to adopt a proactive style of play and for this, balance will be important, both in attacking and defending.” Albeit, this style of pressing puts huge strain on the wing-backs physically. Florenzi, who will probably be playing right-side centre-mid, should be able to come across and help out in the right-back position if (when) Candreva gets caught out of position. Chiellini will probably have a job to do doing the same thing on the left, although Darmian may stay back more. Chiellini, although not a designated ball-playing defender (which is Bonucci), likes to pick up the ball and try to play it through midfield along the floor at times – through any corridors that appear to the strikers.