Both teams entered the final encounter of the season with enforced changed to their side, whilst retaining a familiar shape. Milan manager Christian Brocchi, once a combative central midfielder himself, included a midfield three of Kucka and Poli, with Montolivo orchestrating just behind. Bonaventura and Honda occupied the wide areas either side of Bacca, with De Sciglio switching over to left-back to support and Calabria coming into right-back (in the absence of Antonelli and Ababte). Zapata and Romagnoli took up the centre-back partnership ahead of young Donnarumma. With no Khedira or Marchisio, Hernanes occupied the playmaker-type role, and played alongside Pogba and Lemina in midfield. Lichtsteiner and Evra offered the width, with Manzukic and Dybala paired up front once again. Rugani came in for the suspended Bonucci, alongside Chiellini and Barzagli, with Chiellini taking up the armband as Neto continued his cup run in goal.

The notable theme from kick-off was the pressing from Milan, and their urgency to hassle Juve in their own half. If was a determined and impressive start for Brocchi’s side, who were obviously set up with that midfield three, particularly Kucka and Poli, to try and dominate the midfield spaces. Kucka has been especially impressive at closing opponents down and covering large areas on the pitch this season, but on this occasion we also saw Honda push right up on Pogba, as well as Montolivo doing the same on Hernanes. This often forced Juve into long balls and results in a loss of possession, as Milan appeared to catch Allegri’s team by surprise and prevent them from gaining any momentum. The lack of Marchisio or Khedira in central midfield was noticeable, and Juve struggled for any sort or outlet when in transitional phases inside their own half. Usually their options on the ball mean that the back three can push up and open up the game in front of them, but Milan were able to keep them pressed in and gain no real workable routes through midfield. Without Marchisio, and also Bonucci, there was no-one doing the job at the base of the midfield pivot – it had turned into a completely different approach that Juve had to manage. It took away a lot of their options on the ball. 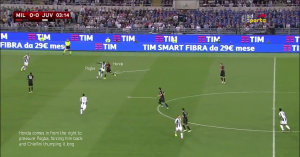 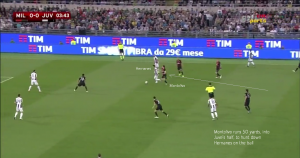 Much of Juve’s play was forced out wide, where neither Lichtsteiner or Evra did especially well. The two strikers were starved of service for periods of the game, and even Dybala was wandering out wide on the right with the ball on occasions, linking with the right-back. It was clear that from the first 20 minutes, Milan were winning the midfield battle and controlling the middle of the pitch, with Pogba sometimes being reduced to a role on the left of his own half. His strength and ability is useful in trying to get possession for his team and start an attack, but Pogba’s main influence is when he can drive forward into the opposition half with his team-mates and create openings to goal. When pinned back, he can get frustrated. As a result of all this, there was no direct route to goal, and little chance for Juve to find a way to start putting their opponents under pressure without a change. Milan’s energy and effective pressing of Juve’s back three was the main determining factor on the game here, which could have left them exposed if they didn’t stick to it, but it worked incredibly well (for about 70 minutes at least) in stifling Juve – but also in being able to break up potential counter-attacks.

The contrast between Montolivo and Hernanes was a telling one. Two players who should have been used in similar roles – the ball playing centre-midfielder, used to start attacks from deep or retain possession etc – ended up playing quite different games. This is illustrated by the fact that Montolivo had twice as many touches of the ball, and made twice as many passes as Hernanes in the game. The Juve midfielder was shut off frequently, and denied access to the ball in space, which Marchisio would have probably coped better with. Montolivo had more time to dictate the play, and often came really deep to acquire the ball – almost resembling Marchisio’s game where he falls into the back-line temporarily at times to collect the ball and figure out a way forward with Bonucci. Montolivo may not quite have the same range of passing or responsibility in his role, but on this occasion he was allowed to move things forward and have a good impact for his side, also being able to press over the halfway line at times. You could see he was really pumped up for it as well, waving his arms at the crowd and spurring his side on. The differences between Hernanes and Montolivo, which perhaps shouldn’t have been so evident, went some way to proving a greater point in the match – it wasn’t so much that Juve’s system was failing, but that it was their weaker personnel that struggled. 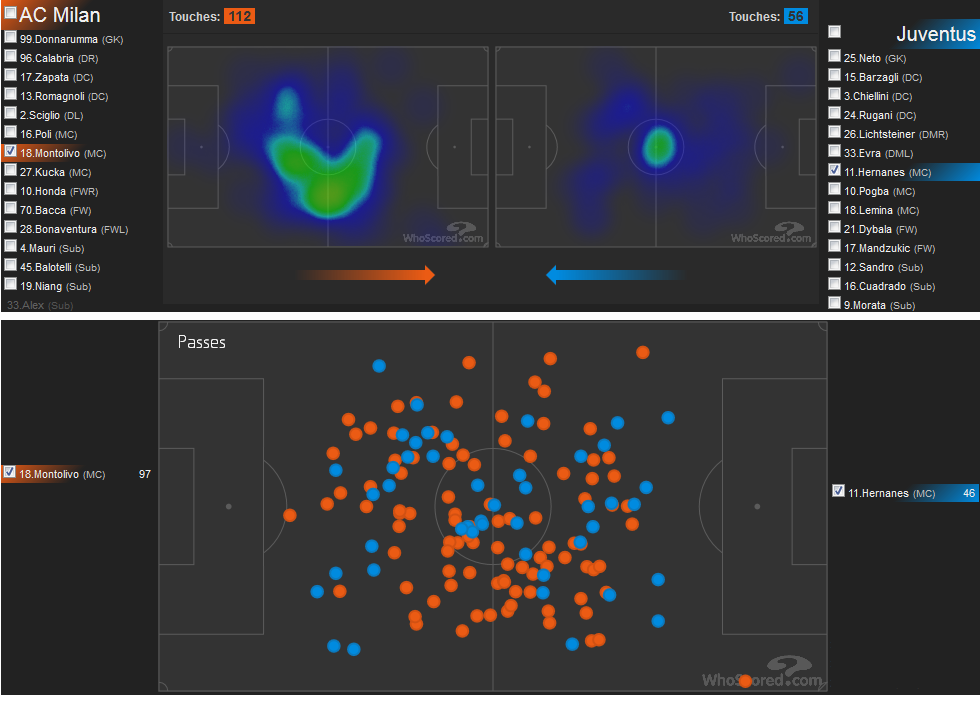 Abate and Antonelli, who have been pretty adventurous this season as you’d expect, were missing from the game – but this left no lack of endeavour from the flanks. Calabria in particular had numerous opportunities to attack, which he did, delivering crosses and supporting well down the right. Both full-backs had a positive role in being able to assist with counter-attacks and sustained pressure as a result of the energy and persistence of players ahead to pin Juve down. The fact that Kucka and Poli in particular were able to retain structure despite the pressing, meant that Calabria didn’t leave them too exposed in going forward on the overlap. De Sciglio had a couple of runs in which he had the chance to cut inside, getting a shot away – which although was probably not a preferred option, it highlighted some of the space that he (not just Bonaventura) was allowed to roam into. Calabria was more of a threat, and although his final ball wasn’t always the best, he did also put in some good crosses. Milan’s failings often came in their lack of attacking intent in and around the box. Honda and Poli both had chances arriving late into the box but failed to hit the target to take advantage of their overload or favourable attacking positions. As you see in the images below, space is opened up for Calabria – Juve just don’t get set well enough – Montolivo can carry the ball into Juve’s half with ease as Hernanes doesn’t close him, Evra has to rush infield to get to Honda because the 3 centre-mids are caught infront of the ball, and Calabria in left open. He ends up receiving the ball and putting in a dangerous cross. 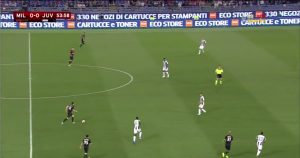 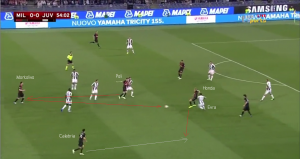 Juve, on the other hand, relied heavily on Lichtsteiner to get forward on the right, and he did to some extent manage to get a few good deliveries in, but nothing consistent. Evra was mainly restricted on the left. Dybala was picking up the ball in deep positions, around the half-way line, which he likes to do, but there was a lack of runners going in front of him. This sometimes forced him down the right, and never really gave the striker the opportunity to acquire possession on the edge of the box and roam into spaces between the lines. The rare occasions where Dybala did find space, the service wasn’t good (image below). The distribution from the back (lack of Buffon & Bonucci) didn’t really help this, or make Mandzukic as effective as he could have been. The major change in the game was when these two were replaced with Cuadrado and Sandro in the second half. 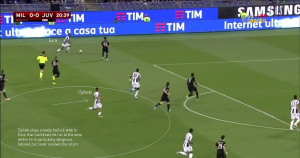 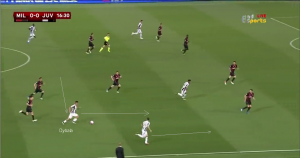 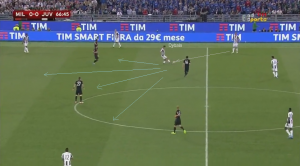 They weren’t changes that would stabalise Juve, but ones that had attacking intent – two players that are direct and can naturally run with the ball. Cuadrado in particular, although would have been disappointed not to start, had a real chance to try and get Milan on the backfoot and spark Juve’s attack into life. It didn’t lend to a patient build up, but possession could convert into counter-attack potential. Sandro showed this straight away as he made an interception and sprung out of defence with the ball down the right, and continuing to hang around the box, coming in from the right with the attack. It also encourages Pogba forward on that side, as we saw a nice reverse pass from Sandro on the left after he made the space, and the French midfielder hit the post at a tight angle. It came at this point, around 65 minutes, where Milan’s energy seemed to drain and their pressing wasn’t as high or intense. Despite Cuadrado being brought on for his offensive quality, his work going back was noted in the opening few minutes of his introduction. His avenue forward was then blocked off shortly after, with Bonaventura back covering this time. Alex Sandro’s combination with Pogba still looked like a promising one on the opposite flank.

The final, and most important substitution for Juve came in extra-time, as Morata came on for Hernanes, but it was all three subs that played a big part in the winning goal. Alex Sandro won the ball in the left-back position and kept it moving infield to Lemina, who powered through midfield and passed out wide to Cuadrado. The Colombian paused to look up, then whipped a cross to Morata who was waiting at the back of the penalty area to sweep it in. It was a great finish from a fantastic counter-attacking move. Juve were able to quickly move the ball beyond Milan’s midfield and get runners going forward into the box, with Cuadrado able to do something that the game had been lacking in general – pick out a very good final delivery. The Milan defence won’t be overly pleased with the goal – Zapata had a look across and saw Morata, but decided to go with Mandzukic to the near post. Calabria couldn’t get back in time to get to the goalscorer, and Romagnoli ended up not really tracking anyone in particular then missing the header. Credit to Allegri and Juve though, for an incisive counter, orchestrated in the perfect way to open up Milan from the front. It was the main way to try and unlock the Milan door, in drawing them in slightly so that they pressed high with Kucka in particular, then using someone like Lemina to run beyond Milan’s midfield and get space ahead of them. Subsequently, it was Morata’s perfectly weighted run to get into the box after having just come on that meant Juve took the lead and won the game.

In general, Milan dominated large parts of the match and will feel slightly aggrieved to have lost the game like they did. However, Allegri used his substitutes very well and managed to turn a scrappy underwhelming performance into an extra-time win. It wasn’t a particularly exciting game for the spectators, but it was interesting to see how both teams adapted to the loss of some first-team players and the high-energy and press from Milan. Kucka, Poli and Montolivo won the midfield battle, especially in the first half. Brocchi should also be pleased with Calabria, who showed confidence in going forward and appeared a threat at times. Allegri’s defence looked decent, but the midfield was average – Lemina was missing for most of the first half, and Hernanes just doesn’t fit Marchisio’s role – his passing was poor and his impact from that position wasn’t really positive. Both teams struggled with creativity going forward, as both strikers were relatively isolated throughout. It was only through Dybala dropping deeper that there was any real link. Milan suffered from having three hard-working centre-mids who’s strengths lie defensively rather than in offence.