Despite playing well in parts in the group stages, Conte’s side went into the knockout stages off the back of a loss against Ireland – one in which although inconsequential to their position, gave away weaknesses to their competitors. The job was to then rally a performance like we saw against Belgium, and for this Conte reverted to a familiar selection. Florenzi deputised for the injured Candreva on the right, and the only surprise was De Sciglio’s inclusion on the opposite flank over Darmian. Before the game, we spoke about the key role in which the pivot and central midfielders could play, considering they have been an indicator of Italy’s effectiveness in transition and cohesion on the ball. De Rossi was brought back in to this role in front of the back three, as expected, and Parolo continued with Giaccherini in the middle.

It was evident that Italy weren’t going to shy away from playing a variety of passes from their own half. From the start, we saw De Rossi play a long searching ball out wide to Florenzi (which was inch perfect), as well as passes through midfield on the ground and the use of the wing-backs when necessary if the defenders were slow in build up or pressured. But the most effective route was often the long ball over the top to Pelle. It has to be said first of all that many of these balls were not aimless or hopeful. Like we’ve seen already on this tournament, Italy are prepared to get a lot of men forward to receive long passes from their own half – often sacrificing a big gap in midfield – and if they don’t win possession from it, they have men there to pressure high-up. Pelle was absolutely superb at winning these long balls, through knocking it on with his head to chesting it down and linking up with Eder. It was probably one of his most influential performances for the Azzurri because of this link-up he provided. Parolo is also actually quite tall as well, over 6ft, and is useful in winning headers. A large amount of Italy’s chances and good attacking moves came from this direct style and good interplay between the attackers. To put this into context, Spain actually made more long passes in the game than Italy. However, Conte’s side were set up so much better to use them and did so with a lot more purpose – making it an effective method of transition.

One of the features of Spain’s play, as we know, is their intent to keep possession of the ball and try to manipulate spaces and angles to find a way forward. We expect them to have more possession and we expect them to make a lot more passes than their opponents. This was still pretty much the case against Italy, but the distribution of passes throughout the team was affected by Italy considerably. A good case in point is Busquets – he is usually one of the most frequent passers in Spain’s team in a match, and generally the better his team play the more passes he makes. Against Italy, Busquets made the third-least passes on his team with only 50 passes in the 90 minutes. This is a considerable amount less than usual (normally close to 100), and his ability to affect the game was stifled by Conte’s men. It was a sign of how disruptive Italy were to Spain’s play, how assertive they were inside Spain’s half and how they congested areas of the pitch which would usually be where Spain settle on the ball and regroup. It may not have been a conscious effort to shut Busquets out of the game, but it happened as a result of Italy’s efforts and in particular Pelle being all up in his space. It wasn’t just Busquets, Italy nullified the threat of Iniesta by getting men back around him when he moved over the halfway line with the ball.

Spain struggled in their efforts up front, with Morata, Silva, Nolito stifled by Italy’s back three. It was a strange circumstance in some ways, because the manner in which Spain pressed in the opposing half was not really one that involved a coordinated team movement – it was more of an individual task – and they never seemed to have a desire to win the ball back, just to occupy Italy’s half and stop them running forward. It didn’t prevent Italy from finding effective passes forward. Playing into Italy’s hands, the Azzurri could easily shut down their opponent when 1-on-1, so the fact that each attacker became isolated with one defender just meant that Italy were winning the battles and were able to hold up Spain’s attacks for long enough to disrupt their rhythm. Spain’s attack being so disjointed and well controlled, meant that Italy wouldn’t suffer from their opponent’s large amount of possession. It even helped them, in a way, to counter and exploit the spaces that Spain would then leave behind their midfield. Italy could seemingly open their opponents up at times & their transition from defence to attack and variety was very good. The second goal, which sealed the win, came from an Italy counter-attack and a switch of play from Insigne to Darmian who was in acres of space on the right. He ended up crossing it in to Pelle in the middle to volley in. We also saw, on occasions, Chiellini run over the halfway line to pass the ball into Pelle’s feet, plus each member of the defence (and De Rossi) playing long accurate balls up to the front-men. It left Spain without any real way of stopping these attacks. We spoke before the game about perhaps Italy needing to find a way to adapt their tactics mid-game, particularly their midfield, if their team became disjointed and ineffective – like periods of the Sweden game. However, it was actually Spain that suffered from not being able to move away from their style of play and get some kind of useful passing going from back to front. They stuck to their guns and suffered as a result, because their game isn’t effective against this defensively resistive counter attacking unit who are so structured and pro-active off the ball. 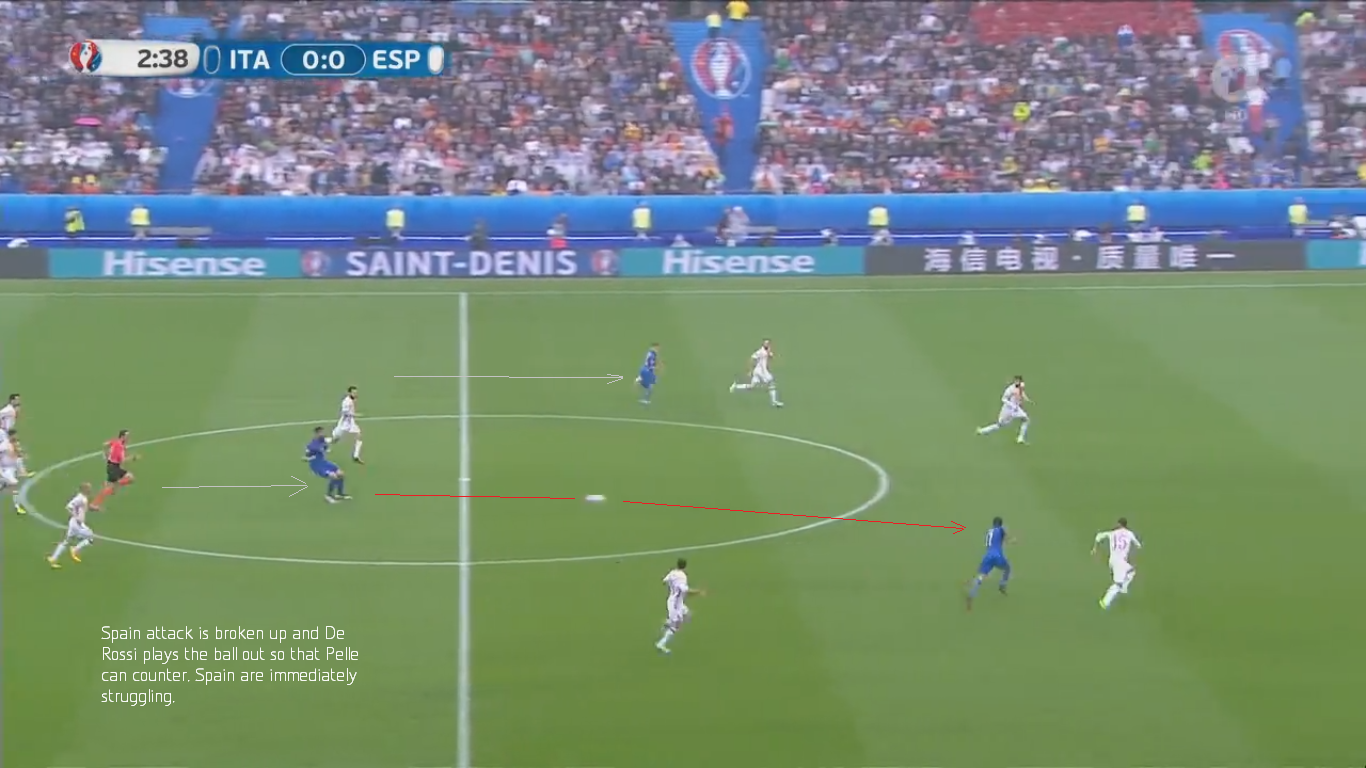 Right from the start, in the first thirty seconds, we saw De Sciglio run up the pitch and rob the ball from Juanfran in Spain’s half, and manage to get a cross in as a result. It was like this for most of the match – Italy’s wing-backs pressured Spain’s ones, and tried hard to prevent them attacking. Shortly after, Bonucci wins the ball back from Spain’s attack and passes to De Rossi, who swivels and plays one simple pass that turns their defensive situation into an attacking counter-attack. Pelle breaks, but Eder slips as the ball is played into him. Florenzi then does the same as De Sciglio at the start, he runs up the right just to pressure Alba on the ball – then, even though he doesn’t touch it, runs back to his right back position to effect the play where Parolo is already coming across to cover anyway. Giaccherini likes to move out towards the left touchline, which in this game was fine – he confronted the likes of Juanfran and Fabregas on the ball, making them pass into a more controlled area infield. Spain were never really able to work with the space behind the wing-back, despite Giaccherini’s high position.

Despite Italy, on paper, playing three at the back, it normally works out that they have wing-backs running back to cover on defence. The key factor here is that the three centre-backs can cover off passing lanes into strikers who might want to run in behind. How often do you see teams successfully play through balls into players who have run beyond Italy’s defence? Very rarely – and that’s testament to their hard work, structure and early reading of the play so they can prepare positionally. Its interesting that Conte went with De Sciglio over Darmian, and in general he played very well, notably marshalling Juanfran midway into the second half – not committing himself or leaving Italy exposed – and also the period between about 19 and 21 minutes where Italy contain Spain’s advances. De Sciglio did get booked on 23mins for pulling back Juanfran – and it was purely because the Spanish right-back was about to run past him on the outside and De Sciglio knew instinctively how important it was to stop him getting ahead. You could tell how well drilled Italy’s wing-backs were, and when Alba got the ball at left-back, Florenzi suddenly clicked into action and sprinted up to him. Like we saw in the second half, Florenzi also mopped up loose balls effectively (perfect example at 68:30), just by tracking back and filling in the defence. He sometimes sprinted 50 or 60 yards to get back ahead of a Spain attack. 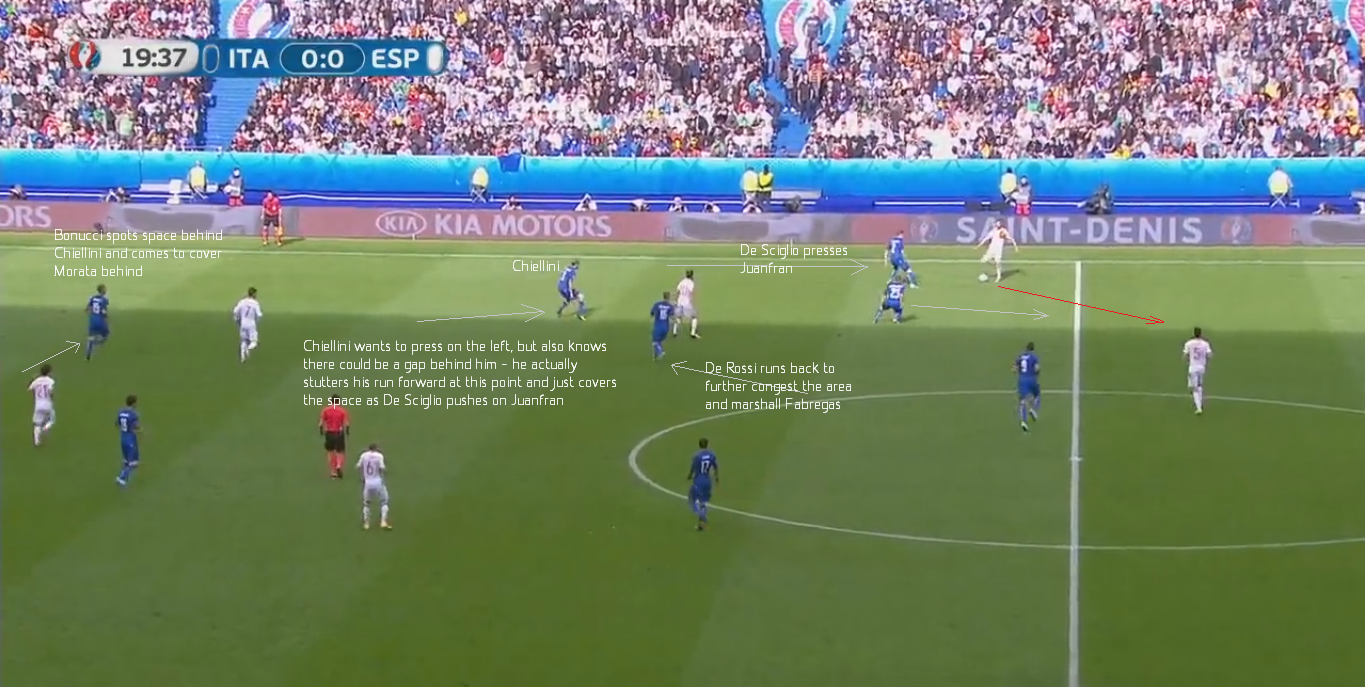 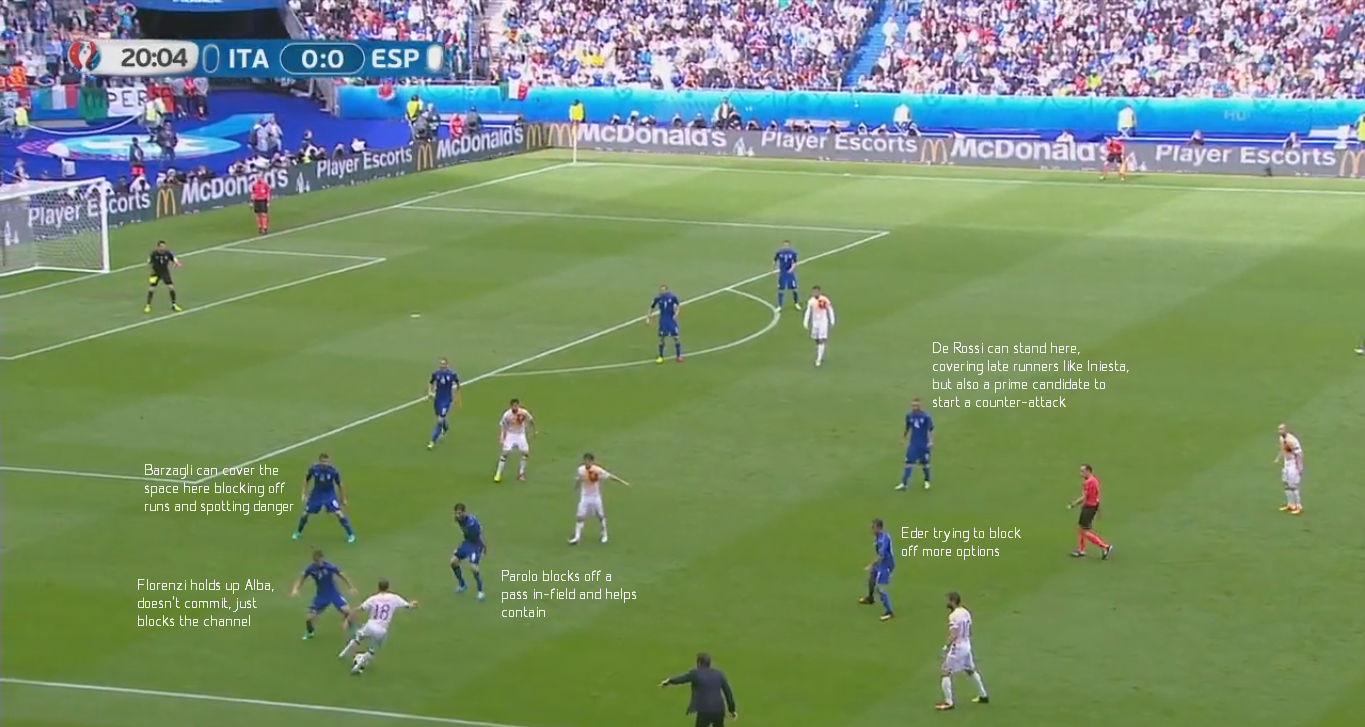 So often these days you see teams become vulnerable, particularly in the second half, because they don’t cover off midfield spaces when out of possession. Italy cover spaces brilliantly, even if there is no man there – it means that the opposition feel crowded and they become mentally drained from having to concentrate on how to play a pass that will keep possession. Once your team learns how to organise themselves as a cohesive unit when out of possession, it then relies on energy and concentration to maintain the foundations of their system. It doesn’t require specific technical ability, or individual talent, and it creates the familiarity of what to do when defending an attack. This is partly what Belgium missed in the first game – they had too many spare men doing nothing instead of affecting the game or covering off spaces regularly. The most specific and technical role outside of Italy’s foundation can come from the pivot/regista – who interestingly enough is now injured (De Rossi), with Motta suspended for the quarter-final against Germany. Over and above this, Italy’s players can develop their individual traits to benefit the system. For example Chiellini is fantastic at watching what is happening in front of him and then pro-actively running out of his defensive line at the right time to tackle an attacker stuttering on the ball. Bonucci will play his accurate long diagonal passes. Darmian will get a booking. Things like that. If Italy have to initiate counter-attacks through the middle, someone (possibly Parolo or Sturaro) is then going to have to try and take on this dual responsibility of defend and attack – of which might be outside of their usual plan of action.