A lot of the talk going into the build-up of this match was the appointment of Gary Neville at Valencia, but they had a lot to worry about on the pitch. Mustafi was still out injured, along with first choice goalkeeper Diego Alves. Cancelo’s suspension and the absence of Barragan meant that Ruben Vezo was pushed into right-back, with a central partnership of Abdennour and Santos. Danilo continued in midfield, alongside Parejo and Perez. Alcacer was left up top on his own in the absence of Negredo and Rodrigo. The away side fielded an ominously strong starting eleven, with a midfield three of Busquets, Iniesta and Rakitic.

Barcelona started with their customary high defensive line, with Mascherano pushing up to the half-way line on the ball. It was clear that they would see a lot of the ball, as they normally do, but the outlet early on appeared to be Neymar down the left, who had the first chance to run at the Valencia defence. Valencia themselves looked to the left-hand side early on to attack, with Danilo getting forward into the box but failing to capitalise on the build-up. Barca started to show signs of their superiority from early in the first half, mainly by setting Neymar off down the wing against Valencia’s makeshift and slightly inexperienced right-back Vezo. The Brazilian appeared to have the beating of him every time and was getting to the byline with alarming ease. He delivered the ball to Messi on one occasion for the number 10 to fire just over, and had another chance himself but shot horribly high. Danilo was dropping in to try and help Vezo after they realised Neymar’s threat, and even Mina on the right wing came back to cover at times, probably even not enough. You can see with the visuals below that the left channel was the biggest danger throughout the match, and generally where Barca looked to to engineer chances. 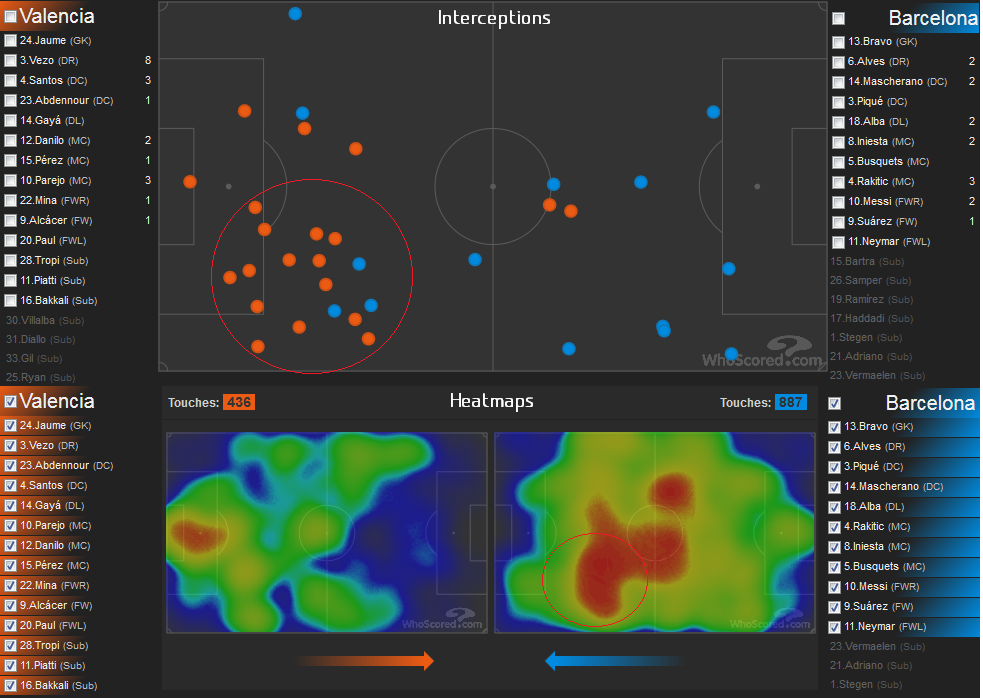 The majority of the Barcelona opportunities at goal came in the first half, with Suarez missing a volley at the far post and also dinking a cross just beyond Neymar coming in. Valencia defended central areas well individually at times, particularly Santos who notably made a good tackle on Messi on the edge of the area and then got a vital touch on a cross the came in to deny Suarez getting a goal. The home team had occasional opportunities to break into the opposing half and Parejo controlled the ball reasonably well in midfield when he got the chance. They had a penalty shout as Perez went down after Pique had his arm on him, but it was optimistic to say the least and rightly waved away. It soon became a struggle for them to get men into the box and provide decent targets for crosses. Against a weaker side, the makeshift Valencia team might have done reasonably well. Danilo attemped to get forward and Parejo manipulated the ball effectively – and they have the potential to use the width offered by Mina and de Paul that can cause problems and stretch the play on the attack, plus Gaya overlapping.

However, Valencia struggled to keep the ball for any meaningful period of time, and gave up possession on the left a couple of times when they should have orchestrated an attack. Alcacer’s hold-up play was good, and he did what he could, but his opportunities to effect the game were limited. He had a chance from a free-kick played into the box, as he found a gap that had been left by the Barca defence, but failed to create a chance after bringing the ball down nicely. Danilo was pretty mobile in the Valencia midfield, but the common theme for the first 45 minutes was pressure from the away side forcing Valencia back deep into their own half as the orange shirts controlled a ball. They obviously knew they were going to have to try and contain Barcelona, and make the play congested in their own half a reasonable amount. They did this by squeezing their back four quite narrow, but then effectively going to a back six at times with the wide players dropping back, and then three men in front of that line to meet the Barcelona players as they approached. Even that didn’t always work with the movement of Neymar and Suarez (pic below). Its all very well reverting to this shape, but its also really difficult to switch quickly to a variation that can attack and hold the ball up the other end for long enough to release players back towards the halfway-line, away from their own penalty area. 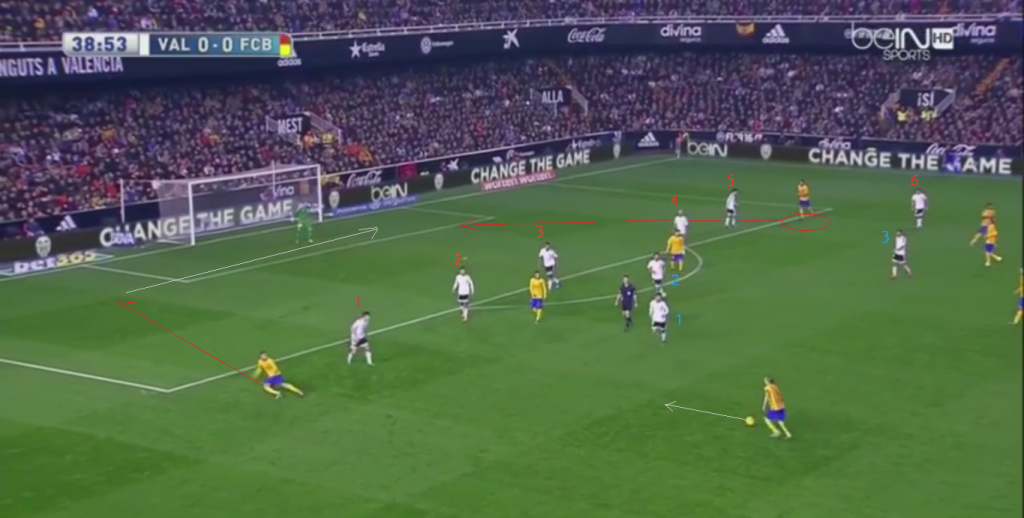 The tempo was often slow, but Neymar was the one to offer that change in pace to get through and create chances at goal. It was interesting to see the dynamic between Barcelona’s front three tonight, because the more dominant Enrique’s side became, the more difficult it appeared at times for Suarez and Messi to open up gaps and cut through the home team. The width offered by Alba and Neymar on the left, and occasionally Dani Alves on the right, was apparently the best chance of breaking the deadlock, but the incisiveness didn’t quite seem to be there in finishing off chances – which would ultimately cost them the victory. From around 35 minutes until half time, the game was played deep into Valencia’s half, and they made it more difficult to find a way through (although not impossible as we saw above). The home team received a free-kick for a foul about half-way into their half on 40mins, and piled back up the pitch as the keeper took the kick long, but then a minute later they were retreating back to the edge of their penalty area. Half-time was probably a good thing for both teams as it relieved some of the pressure for Valencia, and also opened the game up a bit at after the break for Barca.

The home side didn’t start the second half camping in their own third, and the match was relatively open at times leading up to the first goal. It seemed like the best period in the game for Luis Enrique’s team to push for the win because of the spaces that were still available to exploit. Valencia were even pressing the opposition from the front at one stage when Mascherano took too long on the ball, forcing him to go long. However the game was still a bit cagey at this point, and Valencia looked afraid to risk or overcommit. The main problem is that when they get the ball forward to Alcacer, he controls it and gets it down ready to move on to a team mate, but by the time they have men around him or are facing the goal with the ball – they are swamped by Barca players trying to hustle the ball back, and ultimately lose possession. It becomes a bit of a catch-22; the longer the receiver keeps the ball in a confined area, the more likely he becomes to get tackled quickly – but conversely the more he looks to spread the ball out after receiving, the more they realise there’s little support to switch the ball to: a risky low percentage long pass. The only main way to keep possession after regaining it is to maintain momentum and keep the ball moving between men who can get in support really quickly. Once Valencia became stuck in a deep space in their own half, it became too confined to build up momentum. Then even when the game does open up slightly, Barcelona’s style of play can kill the rhythm and force the opposition into a reactive mindset as opposed to one where they can dictate any sort of meaningful movement or possession. One way to combat this is often to counter-attack and use pacey wide-men (someone like Feghouli), but Valencia were wasteful in the few opportunities they had to do this compared to Barcelona – as demonstrated below. 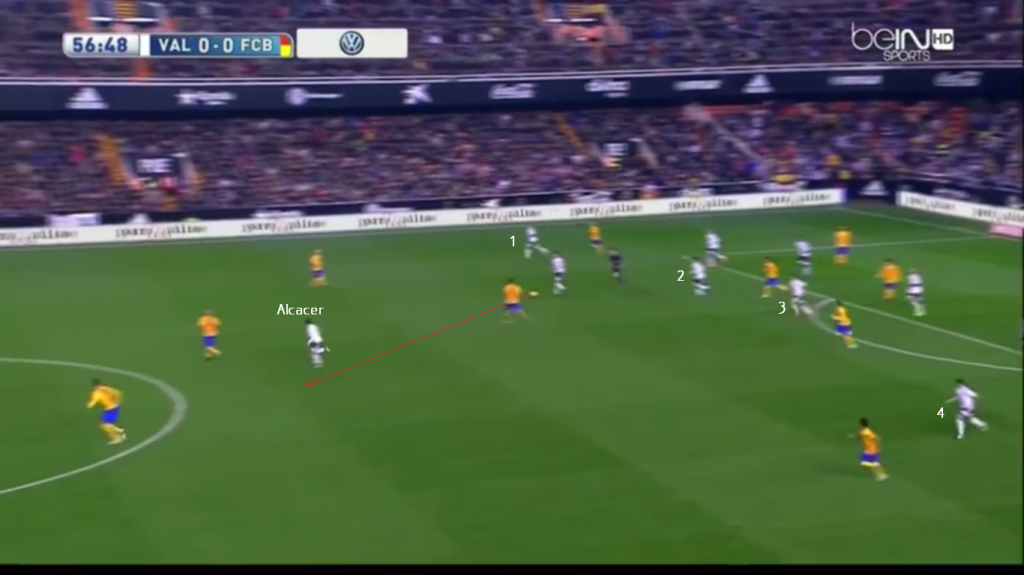 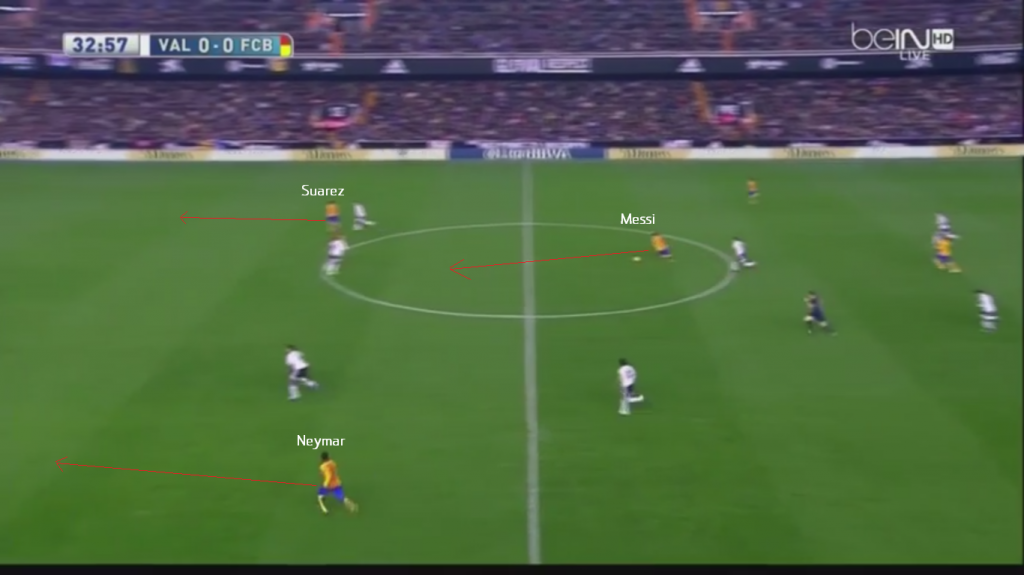 The turning point in the match came on 59 minutes, when Suarez opened the scoring. He had previously become acquainted with Abdennour by stamping on his foot off the ball, and got the better of him for the goal. The Uruguayan flicked the ball off to Messi who then returned it to him as he turned and ran (seemingly just offside, but not given). As Suarez sprinted down the right after the ball, he chested it down, brushed aside Abdennour and fired it in at the near post. Vezo, on the far side, didn’t hold the line particularly well and played Suarez onside originally (although replays suggest he was off), whilst Santos ran out and left a big gap. Vezo tried to run across and block the shot in the end after Abdennour got brushed aside, but didn’t make it, and the keeper got beaten at his near post. Although Valencia’s resilience was broken, it could have been a good thing as it happened early enough for the game to develop after that. The home side had more than enough time to get back into it if they could, and now that they needed to score it was to become more open.

Barcelona were still the better team, and seemingly in control of the match, having 73% possession after 70 minutes, and still creating chances – Neymar with a good run coming in from the left and shooting just wide on one occasion. But Valencia had their moments – de Paul with a good chance when the away side gave the ball away in their own half, but choosing a tame side-foot shot over playing in Bakkali. Valencia’s pass accuracy a this point was less than 50%, which told a story, but Barca were unable to make their superior use of the ball count for much. The home side needed a goal, and left it until 83 minutes to bring on Piatti in place of de Paul. Then a couple of minutes later they managed to score the vital equaliser. It hadn’t really been coming as such, but it was a good goal. A long ball was played up to Alcacer who did brilliantly in getting between Pique and Mascherano, bringing the ball down and shielding it, before laying it off to the onrushing Santi Mina to drill home past Bravo. It was a great goal all-round – fantastic long pass over the top, perfectly weighted from Bakkali, great control by Alcacer and a really firm but well-guided finish by Mina. Luis Enrique will be disappointed at how his side can be undone like that after dominating the game, but they should have been leading at half-time.

There were chances for both sides to win it after that, with Messi pulling a good save out of Juame from a free-kick that was heading for the top corner, and Valencia breaking through Piatti but the resulting cross not reaching a home player and then the follow-up from Danilo saved. Neymar continued down the left, with Alba overlapping, and Messi had a shot that was saved down low by the Valencia keeper, but the match remained locked at 1-1 until the final whistle. Barcelona will rue the missed opportunities, particularly in the first half, whilst Valencia can be pleased to be taking a point out of a game that looked out of their reach for a while. It won’t give new manager Gary Neville too much of an indication as to how his team will be playing when he takes over the reigns, mainly because most teams play differently against Barcelona, plus they had a lot of first-team players missing. However it gives a good look at the depth and adaptability of the squad, as well as an introduction to the intense atmosphere of the Mestalla on a match day.