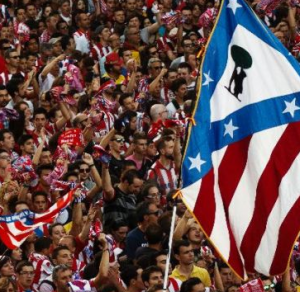 The big theme of La Liga this season was the emergence of Atletico Madrid as a force, not just in Spain, but in Europe. I remember being very close to putting a bet on Atletico to win the Champions League towards the end of the group stages when they were 16/1. Even then it was hard to see them losing games. Their consistency was incredible, and this was proven not just on paper but in their performances on the pitch. The tactical and motivational abilities of Simeone were second to none, their shape and awareness on the field of play was fantastic throughout the season and the work-rate and straight-up desire to win matches ultimately won them the league title. You can argue that Real and Barca were dropping points and ‘gifting’ the league to Atleti, which in some ways was true towards the end, but its hard for anyone to argue that Simeone’s side didn’t deserve the crown after the improvement they’ve shown. Only last year people were talking about the dominance of the top two in Spain and the insurmountable task of breaking that Real/Barca stranglehold on the division.

This season was arguably less about individual performances for the top sides, and more about consistency and cohesion. Messi and Ronaldo, although still obviously hugely influential, didn’t quite have the same impact as the previous record breaking seasons. To mention a few notable individuals, I would pick out Alexis Sanchez who improved on a rather mediocre season the year before, to chip in with valuable goals and assists. Bale had an impressive first season in Spain, one in which many (harshly) thought could easily turn into a flop. I think that Modric had a fantastic campaign and was perhaps the one that had a stand out season. Diego Costa was the main man for Atletico Madrid in terms of attacking threat and goalscoring prowess, although it was largely the work of Miranda and Godin, along with the leadership of Gabi that impressed me.

I was slightly disappointed with the inconsistency of Real Sociedad, after their 4th place last season and inclusion in the Champions League, they struggled this year. Despite finishing in the Europa League spot in 7th, they gave away silly points, particularly away from home, and never really picked up the same momentum they had last time around. Griezmann was again a star performer, earning himself a place in the French World Cup squad. I think whilst Vela is still impressing with 16 goals and 12 assists, Xabi Prieto’s influence has waned and the back four (+ Bravo) haven’t had a brilliant season with the likes of the two Martinez’s not showing the same kind of form we were used to last year.

In terms of the other European places, Athletic Bilbao took the 4th Champions League spot after having a very decent season. Aduriz bagged himself 16 league goals, Susaeta was a creative force with 12 assists along with an ever improving Ander Herrera who is putting in some much more consistent performances. Muniain continues to show a constant standard greater than one you might expect of someone his age and Ibai Gomez always impresses me when we see him – having a great impact from the bench with 8 league goals. They will go into the Champions League playoffs for next season, although if they make it into the group stages I think they may struggle with the extra games and their Basque recruitment policy may not help their squad too much over the summer.

Villarreal started the season newly promoted as the surprise performers, racing into the top four in the early stages. Their style of counter-attacking low possession football was incredibly effective. I remember their away game against Rayo in which Villarreal won 5-2 with only 30% possession. However they faded away slightly, after a patchy second half of the season, ultimately finishing in 6th place, level with Sociedad on points. Sevilla had an incredible season. They capped it off with a Europa League win and a 5th place finish in the league. They handled their fixtures superbly and, despite a poor spell in January, they showed great consistency. Their stand out players were Bacca with 14 league goals, and the hugely impressive Ivan Rakitic with 12 goals and 10 assists (not to mention what I reckon was pass of the season in the latter stages of the Europa League final). He will hopefully feature heavily in Croatia’s World Cup campaign.

The relegation fight this season was relatively close, with two of the newly promoted sides – Elche and Almeria escaping narrowly, 1 point above the drop zone. It became obvious pretty early into the season that the other newly promoted side Villarreal would be more likely to finish in the top half of the table than the bottom. Betis, who were 12/1 to go down before the season got underway, ended up being cut well adrift and looked down and out reasonably early. Valladolid simply drew too many games – 15 in total – which saw them finish 19th, although Javi Guerra finished the season with 15 league goals. Osasuna didn’t come out of it much better, although only a point from safety. Their top scorer was Oriol Riera who ended up on 13 goals for the campaign.