Always an exciting prospect, the first Juve – Milan encounter of the season could have culminated in either the away side moving five points ahead, or Alegri’s Bianconeri leapfrogging Milan in the Serie A standings. Juve started with a 4-3-1-2, or effectively at times a diamond formation, with Lichtsteiner and Evra offering the width as Pogba, Sturaro and Marchisio played central. Hernanes was deployed more in a number ten role behind the strikers Dybala and Mandzukic. The away side fielded a familiar 4-3-3, Alex at centre-back and Abate on the right, Bonaventura came back in for Poli and the front three remained as Cerci, Bacca and Niang. 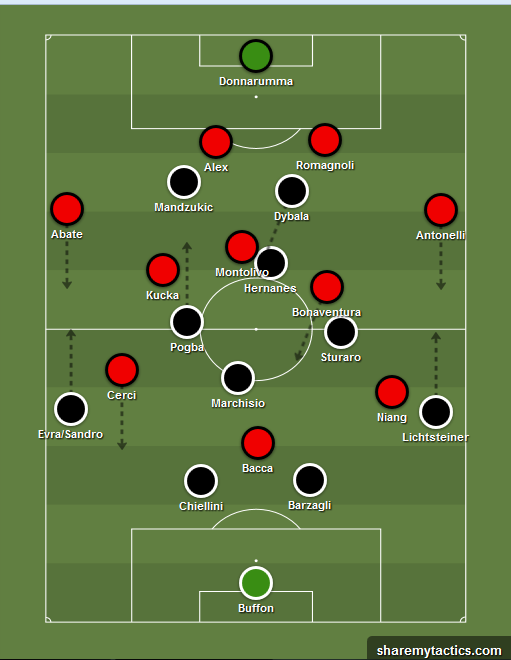 Juventus pressed the opposition defence at the start, trying to force them to hurry the play and disrupt any rhythm they sought early. Milan have been constantly looking to play the ball short from the goalkeeper this season, often out to the full-backs – even as wide as square if necessary, but Juve’s two up front made this too difficult as it offered very little route out from the back along the ground. Along with this pressing, it may have been likely to see Juve try and expose Alex’s lack of pace and make runs in behind early on. However, this never really happened, and Milan looked pretty solid throughout the first half defensively, keeping their shape well and not getting too exposed by Juve’s two strikers. Montolivo appeared to try to track Hernanes and/or Marchisio when they came through central areas, but it was Kucka who did a lot of the early tackling and ball retrieval from midfield. The Slovak had an interesting game, on the one hand he made by far the most tackles, yet he also lost possession of the ball more than any other player on the pitch.

There was a reasonable amount of space in midfield early on, and the tempo of the game was pretty quick at times. Cerci was looking to get down the right wing, as he always does, but his final ball was again somewhat questionable. He did well to get past Marchisio on one occasion to break forward, and again after Kucka won the ball back, but even after getting to the byline failed to deliver a meaningful cross. Chiellini often tries to cut the ball out, or win the first ball played into the opposition attacker, and his role this evening involved coming across to cover the area on the left that Cerci was trying to run into. Evra went off injured later in the half and Alex Sandro, who got forward a lot (especially when Juve went to a 3-5-2 after the break), came on. Sandro generally struggled with Cerci during the game, and his impact definitely came further up the pitch. On the other side, it became slightly open at times. Lichtsteiner was marauding forward, as he does, and Barzagli offered some cover around that area, but Bonaventura and Niang had opportunities to exploit the left-hand side, and Antonelli would have liked to have had a greater impact overlapping.

Juve began to dominate possession, and looked to exert their control over the game as far up the pitch as they could. Milan, on one occasion showed decent interplay in the final third, but never really troubled the home side’s shape. At the other end, Dybala looked lively and quite often came deeper in search of the ball, and had good movement in and out of possession. Mandzukic didn’t have a great impact and was relatively quiet, having significantly less touches than Dybala and not getting a chance to get threaten inside Milan’s penalty area anywhere near as much as he’d have liked. Mandzukic did on occasion get time to accept the ball, as the away side didn’t always get tight to him and appeared to allow him some space to operate. That being said, the Croatian became slightly frustrated. Under Conte, one of Juve’s main strengths was their link-up of the strikers as they used the two-striker approach extremely effectively. They were able to manage transitions from midfield to attack and demonstrate movement between the lines that unsettled and broke through opposition defences. It’s obvious that they are still trying to fill the void left from Tevez’s departure, whose movement and purpose with the ball was so key up front. Llorente, although never setting the world alight, built up a partnership with Tevez where they appeared to work really well together as a duo.

Milan’s gameplan appeared to include winning the ball in midfield, usually through Kucka, and then try to break down the flanks. They managed this on a few occasions, mainly through Cerci down the right, but couldn’t turn this into an effective strategy where they penetrated Juve’s back line. The system tends to under-utilise Bonaventura at times, who is their most creative player going forward. Compared to Juve, who only gave the ball away 3 times in their own half of the pitch in the match, Milan were slightly careless with the ball and struggled to get rythym in central areas. (pic below). Bacca was also incredibly quiet throughout the game and spent very little time near the opposition area. Montolivo had the most touches for Milan in the game, but spent parts of it trying to guard the middle just inside his own third of the pitch. On one occasion, he followed Hernanes running deep towards the Milan box, but let him drift away, offering the Brazilian with a chance to shoot but fluffed his kick. Then, soon after, Marchisio was able to get space to shoot just outside the area, after Montolivo had been taken away, allowing the Juve player to force a save from Donnarumma almost unopposed. In the Juventus midfield, Hernanes appeared to struggle to get anything going. You’d expect his job, behind the two strikers, would be to create chances and offer support going forward – but as has often been the case this season he didn’t really deliver, before being subbed at half-time. Dybala moved into his space a fair bit, and created a chance by running with the ball through the middle and passing to Hernanes, but the Brazilian delayed and never got a pass back into the area. At this point the crowd got on his back slightly. He managed to fashion a chance just after, with some stepovers and a shot that whistled just over the bar, but in truth it felt like Juve could have utilised someone like Cuadrado instead if they were looking to create more chances for the front men.

Allegri’s side won the ‘battle’ in midfield as they dominated possession in the middle, particularly further into the second half. Pogba and Marchisio had the most touches in the match aside from Chiellini, Marchisio with 19 more touches and 18 more passes than Montolivo who was statistically Milan’s most involved player. Sturaro also had a good game, despite getting booked midway through the first half. Bonaventura looked like Milan’s most proactive midfielder again, as he skipped past Pogba on the left only for Marchisio to bring him down. However Pogba himself was able to get forward and pose a threat, particularly after the break with Sandro overlapping down the channel, which eventually lead to the goal. Lichtsteiner was getting forward on the other side as well, but managed to run back and thwart Milan’s chances of a counter-attack on at least one occasion. As the teams headed in at the break, Juve had looked the better team, but weren’t creating too many clear opportunities and the away side had defended pretty resolutely. The obvious change was to replace Hernanes, who had little influence, but it was Bonucci who was introduced – prompting a change to a 3-5-2 formation, pushing the wing-backs further forward.

Milan had chances to create opportunities on goal at the start of the second half, notably through Bonaventura running with the ball, and then Kucka getting a header inside the area from a Cerci corner, but being unable to hit the target. However, it was Juve who continued to look the better team, pushing through midfield, allowing Sandro to run with the ball and cut inside, shooting wide on one occasion. Even when one of the Bianconeri back three had the ball, they sometimes looked for runners upfield, to play long passes over the top and try to release a striker on goal. Often it would be Lichtsteiner who would run down the right and look for this diagonal long ball from Chiellini. Pogba had a shot from 40 yards, which dipped and produced a save from Donnarumma, with the Italian youngster making another good punch from the resulting corner. Dybala’s movement continued to be a factor for the home side, as he moved between the lines and ran forward with the ball, as well as coming out wide (pic below). On 65 minutes the breakthrough came, when Pogba exchanged passes with Sandro and the resulting flick set the Brazilian left back down the wing. He crossed in for Dybala who came running in, Alex got slightly drawn towards the ball as the Juve striker came in behind him, with Montolivo too far back to chase, and it was a great volleyed finish inside the near post after good control. 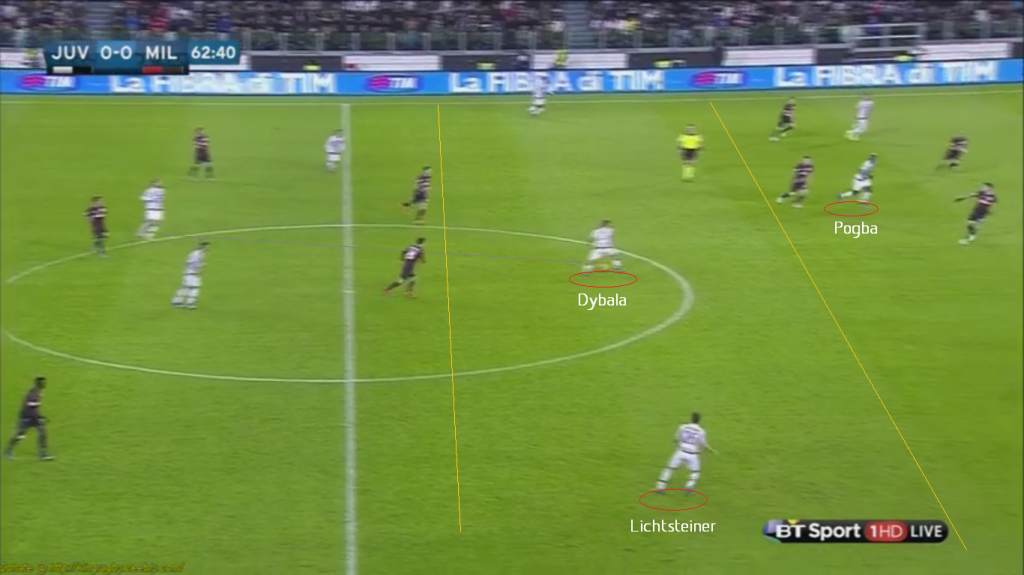 Kucka perhaps offered Milan the best opportunity to get back level, firstly having a difficult opportunity just inside the area, after Cerci’s cross, but volleyed over the bar. When Cerci gets to the byline, he can put in a dangerous delivery, its just a question of picking out the final ball more consistently for him. You’d expect Bacca to be one to get on the end of more opportunities in the box, but he was quiet all game. Juve controlled the ball and looked to become more confident after the goal. Pogba continued to get high up the pitch, Sturaro had come into the game more after the break, and Dybala was still running through the middle. Mihajlovic was perhaps slightly slow to react, in waiting until 73 minutes to make a change, at which point he took off Kucka to bring on a second striker – Adriano. This was a bit surprising, as Kucka was getting chances in advanced areas and was one of their better players, but there weren’t too many other options as he wanted to go to effectively a 4-2-4. This didn’t really help Milan in the middle of the pitch where Juve had control, as it left Bonaventura with Montolivo in the central area only, but the dice had to be rolled and sacrifices made. Even so, Milan found it hard to break through the opposition defence, which kept shape pretty well, adapting from 3 to 5 at the back with midfielders plugging holes as well. Juve continued to hassle Milan high up the pitch at times, and Sandro kept getting forward down the left, but the game fizzled out a bit and Allegri’s side claimed victory.

Dybala, who was subbed late on for Morata, showed that along with Pogba, he can be the man that Juventus look to when they need to come up with the goods. His movement and willingness to get involved and make things happen in the final third, overlapping with midfield, were great – and far outshone Mandzukic who has struggled. In general, Juve were more considered and careful in possession, only losing the ball three times inside their own half. They looked to have more energy and dominance over key areas, making purposeful runs and passes into the opposition half. Milan relied somewhat on using Cerci as an outlet for countering, which didn’t really provide enough chances to worry Buffon. Bonaventura failed to have a massive impact from a central deeper role alongside Montolivo, and Bacca was pretty starved of good service. Allegri should be pleased with the way his team managed the game, and never looked under too much pressure, despite this perhaps being a significant game in terms of their push back up the table.
Tweet