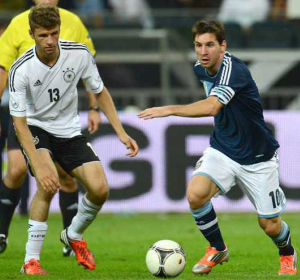 Germany have played the more convincing football throughout the tournament and understandably go in as favourites here. However, Argentina have been resolute in their own way. People expected Sabella’s side to score goals and concede goals – with their attacking force of Messi, Higuain, Aguero, Di Maria, Lavezzi – and their less well known defensive line. But they’ve not really done either. They’ve struggled to create attacking opportunities, particularly against organised teams, but have been reasonably solid defensively – more so than we expected – with Mascherano helping out greatly and becoming a candidate for player of the tournament.

The key to beating Germany appears to relate to two aspects – can the opposition get on top early and stop the Germans getting into a flow and controlling the game – and getting in behind their defence with pace and intent on the counter. This is why Di Maria could be crucial – if he plays, although Perez actually did a good job of moving with the ball up the pitch against Holland, Di Maria is very good at breaking with pace and injects the energy into his team’s attacks that they need. It is yet to be seen whether or not Aguero will start, but you’d have to think that Argentina would benefit from him up top for the same reasons – pace and power. Messi is the man everyone will look to, but his role of instigator might again be thwarted by the two defensive midfielders. It all depends whether he can get those pockets of space to operate in and act as playmaker behind the striker. He will at some point try and dribble through the middle, and he needs the runners there to supply before Germany can get their mids onto him.

I think people are over-hyping Germany’s dominance a bit due to their destruction of Brazil, who played 100% into the German’s hands, as well as being woeful. I expect this game to be more tightly contested, and although disappointing for the neutral – probably low scoring. I see Draw/Draw @ 7/2 in halftime/fulltime as decent value. Both teams might be slightly cagey and start slowly – this covers the 0-0 and 1-1 in a way which gets more for your money than a straight up draw after 90mins. 0-0 at halftime is @11/8, which could also be worth a shout at that price. Extra time is always difficult to predict, but I think that if it does end in a draw, Germany to win in ET @9/1 is reasonable value here.

One thought on “Germany vs Argentina – World Cup Final”